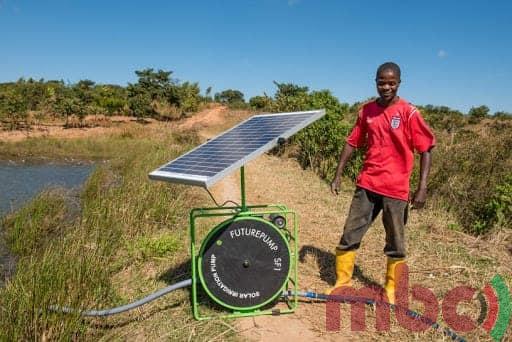 When Austin Kayuni quit his job as an ICT specialist to run an agricultural organization, he had one big motivation: Venturing into agri-business had always been his passion.

He founded Malawi Technologies Limited (MTL), which partnered with Malawi Fruits, a Scottish charity working in Malawi under the Malawi/Scotland Partnership Programme.

“I had always wanted to assist the agriculture sector by empowering smallholder farmers to adopt
irrigation and other modern farming technologies in the northern districts of Malawi,” Kayuni told MBC.

MFT provides training, tools and support to local farmers and community enterprises through rent
to own model.

Though the initial investment is expensive at K700, 000 per set, “but in the long run
small scale farmers benefit by saving money that would have been spent for fuel and repairs as the
solar water pumps are reliable and durable.”

Kayuni adds: “The whole idea is for farmers to be active all year round which means more resilience
to effects of climate change and increased household income that is used for their basic needs.”

“When we sell the solar powered pumps we give three year warrants and we service them ourselves
during this period so that there should be transfer of skills to the farmers when the period elapses.”

Farmers in groups or individually are also offered the water pumps through contract loans with
MFT and they pay over a period of time using proceeds they get from their fields.

“More than 260 pumps have already been taken up by farmers and now since the introduction of
this irrigation initiative, farmers are growing their crops 2 or 3 times a year.”

Over 1,200 farmers have already benefitted from this irrigation initiative and Hippo Honde is one
of the small scale farmers at Ekwayiweni in Mzimba district and says he is now growing crops 3
times a year.

Honde said: “I was assisted with solar powered irrigation equipment which I use as drip irrigation
in my field and my harvest has doubled since then from my 1-hectare farm.”

Kayuni and his organization has also been targeting young farmers in rural areas through the
Inspiring Young Farmers project and he says some of them now have started other smaller
businesses through savings they get from agriculture.

“We run a youth oriented agricultural project called Inspiring Young Farmers and the youth who
took part were very motivated and others are now doing other businesses apart from agriculture
and this is helping in changing mindsets about new farming technologies” he says proudly.

The project mobilized young people in farmer clubs by providing training in modern farming
technologies and they were also provided with capital for the first two years of the project in form
of farm inputs under a revolving fund.

One of the beneficiaries of this project is Desire Msowoya from Chinyolo, Rumphi District, a
single mother of one who dropped out of school due to financial hardships and ended up in an
abusive marriage.

As a member of Chinyolo Young Farmers Club, Msowoya now has joined a village savings loans
group and has ventured into a small business apart from farming while at the same time going back
to school by financing her education from profits she is making.

Msowoya says she has since left her marriage and is living with her grandmother together with her child.

“I had dropped out of school, got married and stuck with an abusive husband, I was not sure what
my future would look like.

Today am certain of my future, education is the answer and am thankful to the Inspiring Young
Farmers project for giving me the tools to earn an income and pay for my school fees,” she says.

Kayuni says one of the biggest challenges in Malawi is that farming is not mechanised but still dependent on a hoe.

“In this way, farming is still subsistence and farmers fail to adopt new technologies.”

Kayuni says currently he has model farms for different hybrid seeds where farmers see firsthand how
the crops do and is able to convince farmers on the advantages of modern farming.

“Before taking the seed to farmers I grow them myself first and study them how they do in the
field and I invite farmers to see and differentiate with local seeds and this way many are convinced
with what they see.”

Kayuni says: “It’s really painful for farmers to be making losses year after year because of using local varieties
and outdated farming practices.”

He also points at mechanization as a crucial area where there is need for more investment and he
suggests smaller power tillers that are cheaper than expensive tractors.

His organization is already renting out smaller tillers to farmers, targetting 800 more farmers in the next few years to teach
them climate smart agriculture.

Maize being the major crop in Malawi, Kayuni is currently also embarking on sensitizing and
teaching farmers to always use modern ways of grain storage to avoid harvest losses.

His orgsnisation is also currently involved in horticultural and vegetable crops, sourcing of markets on
behalf of farmers as well as construction of irrigation dams in some districts of the Northern region
meant for rain water harvesting.