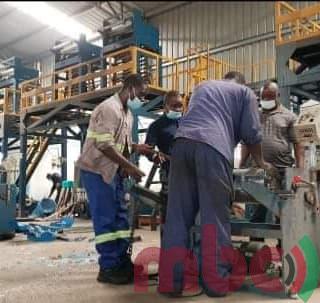 Aubrey Matemba, Director of Technical and Vocational Training in the Ministry of Labour, received the equipment on behalf of the college which will use the machines for learning purposes.

The machines were confiscated in January last year following a court determination delivered in September 2020.

Chief Magistrate, Violet Chipao, now High Court Judge ordered forfeiture of the machines after establishing the company had flouted the 2015 plastics regulations. The owner of the company Ma Xiao Ping was given a one-month suspended sentence.

Earlier this year, the Ministry of Justice included the machines on the list of items that were earmarked for disposal through public auction but later changed tune after some consultations.

Presently MEPA is unable to enforce the ban following a court injunction obtained in July 2021 by Golden Plastics of Lilongwe. Attorney General Thabo Chakaka Nyirenda challenged the Injunction in December 2021 before Justice Lovemore Chikopa but is yet to make a ruling on the matter.

Last week, Environmentalist, Elias Gaveta, pleaded with the courts to expedite the case.

Companies have taken advantage of the restraining order to scale up thin plastics production.