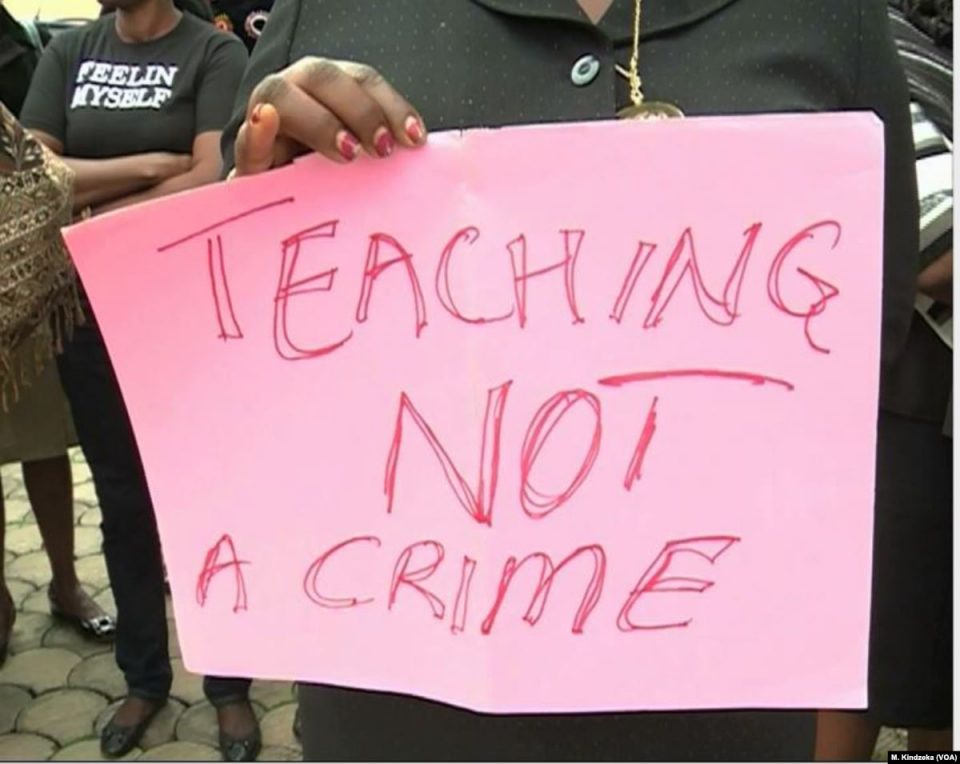 Cameroon teachers are protesting what they say is growing violence against them by both students and their parents, and the teachers are urging the government to protect them and reinstate corporal punishment.

The teachers say the absence of corporal punishment is encouraging abuse of teachers. This week, several attacks on teaching staffs were reported, including one in which a teenage student fatally stabbed his teacher, in the capital.

Students shout Saturday at a government-run school in Obala, a town on the outskirts of Cameroon’s capital, Yaounde, protesting the principal’s decision to destroy all mobile phones and knives seized from children Friday at the school. One of their senior discipline masters, Narcisse Ateba, says the students use mobile phones to access social media platforms that promote violence, and they also use sharp objects such as knives to attack their peers and teachers.

As students in Cameroon began their annual exams Monday, hundreds of their teachers in English-speaking regions were on the streets protesting. The teachers are demanding better security after three teachers and a student were abducted, adding to scores captured, killed, or whose property was torched during a two-year separatist conflict.Teachers dressed in dark clothes and holding signs demanding better security walk down a street in Bamenda, the capital of Cameroon’s northwest region.

He says that some parents and students will want to harass or beat him up, but he has nonetheless decided to publicly destroy the 15 mobile phones found and seized by teachers from students Friday because it is illegal to use them in classrooms. He says he will not allow students to come to school with razor blades, box-cutters and knives.

The destruction of the mobile phones and the peaceful marches to administrative offices and palaces are part of protests by teachers at Obala against what they say are increasing acts of violence against them.

This week, a 16-year-old student at the public school Nkolbisson in a neighborhood in Yaounde is accused of using a knife to stab his mathematics teacher who died of excessive bleeding as he was being rushed to a hospital. The school said the student insisted on using his mobile phone in class against the teacher’s instruction. The student was arrested and detained by police, and will be answering to charges, including premeditated killing.

Another teacher this week was battered by students in Douala for questioning why they were late to school, and yet another teacher in Douala was beaten by a parent and fell into a coma. The parent was said to be angry with the teacher’s decision to use corporal punishment on his son as punishment for making noise in class. In another incident, a student used a machete to chop off another student’s finger in Obala after a fight during a soccer match.

Elvis Yisinyuy, an official with the Cameroon Teachers Trade Union in Yaounde, says attacks by students on teachers intensified in 2015 when Cameroon prohibited teachers from beating or severely punishing students.

“When a minister says that teachers are not supposed to administer corporal punishment to students, the student will now see that he [the minister] has the right to bring disorder because there is nothing the teacher can do in class,” said Yisinyuy. “The minister should revisit the text and permit teachers to administer corporal punishment with caution.”

Yusinyuy said the high wave of drug consumption by students and the inability of teachers to use corporal punishment because they have been prohibited from doing so is also responsible for the wave of attacks.

Nalova Lyonga, Cameroon minister of secondary education, says corporal punishment can not be tolerated because it is an abuse on the rights of students who are mostly children.

“What I have told the teachers is that they themselves have to make a distinction between a disciplinary case and a case which becomes a criminal case, and they should be able to report to the special police at the disposal of the schools,” said Lyonga.

Lyonga said Cameroon students are exposed to other cultures of the world because of the increasing use of mobile phones, and they gain access to social media platforms that promote violence, while neglecting the peace and unity that Cameroon traditionally preaches.

Carol Kayum, president of Reference Citizens, a non-governmental organization that promotes citizenship education, has been visiting schools in Yaounde to educate both teachers and students against violence. She says Cameroon should uphold it’s culture of non-violence to prevent the growing number of assaults on other students and teachers.

Kayum said many people now join the teaching profession because they lack jobs, and not for the love of teaching, and as such, they are not loved by students.

The students also have complained they are harassed by some teachers whom they accuse of behaving poorly or not teaching well.

The Cameroon Ministry of Secondary Education has recorded 40 violent attacks by students on their peers, 22 attacks on teachers and 15 attacks by parents on teachers within the past month.