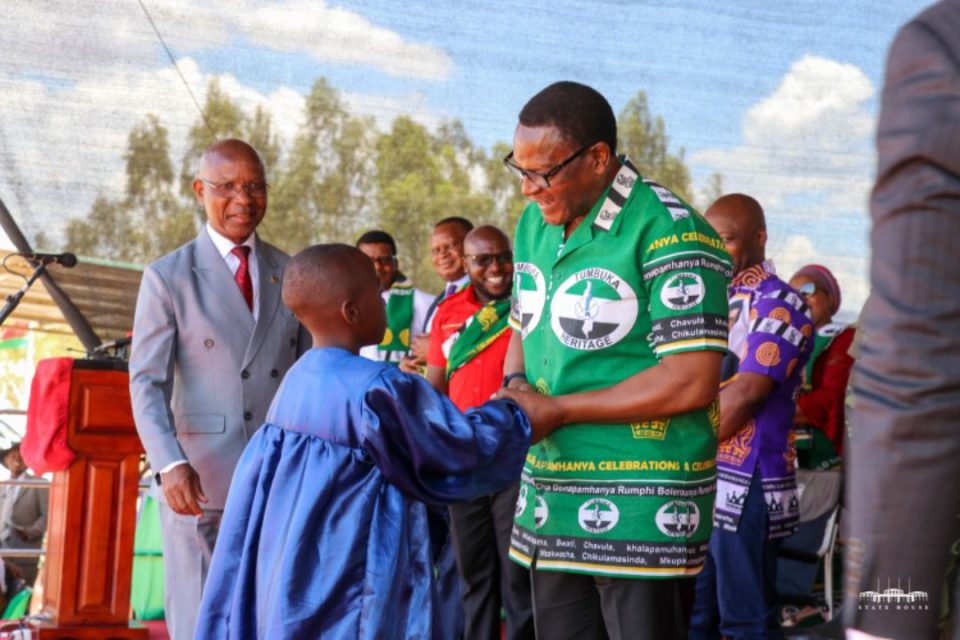 President Dr Lazarus Chakwera has described culture as key in promoting peace and unity as well as enhancing social-economic development among Malawians.

The Malawi Leader said this during this year’s Gonapamuhanya Cultural Festival of the Tumbukas at Chikulamayembe’s Headquarters in Bolero, Rumphi.

Despite hailing the importance of culture, the Malawi leader said one way of realising a new Malawi is the need to abolish every harmful cultural practice that harrases girls and women such as Kupimbira and Mbirigha.

“We must use cultural festivals like this one to challenge those beliefs. If we leave unsound cultural beliefs about women unchanged, we will continue seeing the destruction of the self-esteem of Malawi’s girls and women which negatively affects their confidence in themselves,” said Dr Chakwera.

“I am also disturbed by reports of human rights abuses against our women and girls, and I condemn such abuses in the strongest possible terms,” said Dr Chakwera.

On corruption, the President described some cultural practices as a driving factor.

“I do not doubt that these cultural beliefs are what fuel corruption in government, where people go in and treat resources of the country as spoils won in the battle of political campaigns,” said Dr Chakwera.

In his remarks, Themba la Mathemba Chikulamayembe urged chiefs to take a leading role in promoting unity among themselves and their subjects for a better Malawi.

Paramount Chikulamayembe also encouraged all Malawians to preserve the environment as one way of helping the government to fight against climate change.

During the event, the Tumbuka Paramount Chief also recognized 12 clans from his royal family with special badges.

This year’s ceremony was commemorated under the theme: ‘Developing education, good cultural practices, togetherness, peace and ending corruption and bribery’.

Paramount Chief Kyungu of Karonga and Chitipa, Inkosi ya Makhosi Mbelwa the 5th, and some traditional leaders from Zambia were among the dignitaries.

Gonapamuhanya is an annual commemoration of the arrival of the first Tumbuka King Gonapamuhanya who ruled the Nkhamanga Kingdom from 1780.