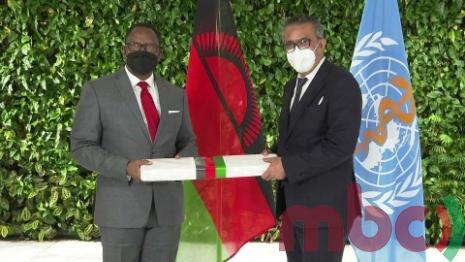 The World Health Organization (WHO) is to give Malawi one million dollars (K803.7 million) towards the health of communities affected by floods in Malawi. Director-General of WHO, Dr Tedros Ghebreyesus, disclosed this during a meeting with President Dr Lazarus Chakwera in Geneva – Switzerland.

Dr Ghebreyesus said  WHO understands the need to avoid outbreaks of diseases such as Cholera, Diarrhoea among the affected communities hence the support.

During the meeting, President Dr Lazarus Chakwera and Dr  Ghebreyesus brought to the attention of the world, the health problems that the 994 thousand flood survivors are facing.

Dr Chakwera said following the floods, 190 thousand are currently living in 124 camps, where they need support in health services to avert outbreaks of diseases such as Cholera and Malaria. The Malawi leader disclosed that some health facilities and drugs were destroyed hence the appeal to procure more drugs.

While on COVID 19 situation, Dr Chakwera said Malawi is registering a decline in new cases and admissions. “As of 20th February a total of 1,907, 381 vaccine doses have been administered,” said Dr Chakwera. However, Dr Chakwera appealed for support, saying, “Covid 19 has made  other health services suffer because financial and human resources are all being directed to the fight against the pandemic.”

While on the Polio case, Dr Chakwera said his administration is increasing surveillance to establish if there are more cases. For his part, Dr  Ghebreyesus commended Malawi for fighting against the pandemic. He urged the government to keep up the campaign and get more people vaccinated.

He went on to announce that WHO will give Malawi one million United States Dollars (K803.7 million)  for a start towards enhancing health services for flood victims. On the polio case, Dr  Ghebreyesus commended Malawi for rapid action to contain the situation, while on COVID 19, he disclosed that Malawi will get 7 million more doses soon.

Khumbize Kandodo Chiponda, Minister of Health in Malawi, commended WHO for its continued support. Later, President Chakwera met in audience President of the Human Rights Council Federico Villegas. Among other things, the Malawi leader assured the Human Rights Council of his administration’s commitment to promoting the rights of vulnerable groups such as people with disability, women, refugees among many groups.

Dr Chakwera assured the Human Rights Council president that his government is also ensuring that governance institutions such as the ACB, the Legal Aid Bureau, the Judiciary and the Malawi Human Rights Commission are all independent.

For his Part, Villegas commended Malawi for continued promotion and respect for human rights, saying it’s one of the Southern African nations whose record is good. Malawi became a member of the UN Human Rights  Council in 2020.