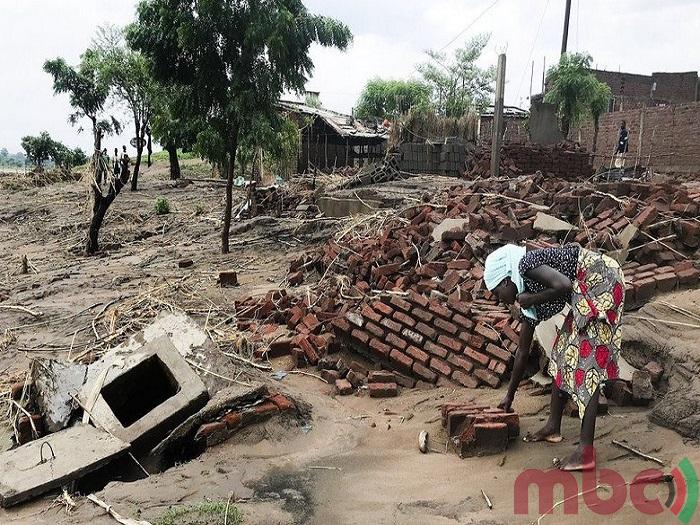 Jane Katchetche, 13, from the area of Traditional Authority (T/A) Mbenje, Nsanje district, Malawi, is still heartbroken. She lost her father, who is among the 20 people declared missing following the ravaging floods caused by Cyclone Ana that hit most parts of the southern region of Malawi early this year.

Furthermore, the floods linked to Tropical Storm Ana brutally pushed Jane and her two siblings [aged 4 and 8] out of their home.

She is among flood survivors being sheltered at Bangula Admarc Evacuation Centre in Nsanje. Jane’s life, for now, is a mixed bag of grief and uncertainty.

Vulnerable communities—both in rural and urban areas suffer the most

“I don’t know what will become of us. We lost everything. We can’t go to school. The floods even washed away my dream of becoming a nurse.

“If he [my father] was alive, we would have been hopeful that things would get better, but there is no hope in sight,” says Jane, while wiping up tears from her eyes.

The plight of Jane and other households at this camp is at the mercy of humanitarian organizations.

Likewise, Ester Maganizo, a secondary school student in the area of Traditional Authority Malemia in Chikwawa, witnessed and survived cyclones Ana and Gombe.

Ester says children could not attend classes to enjoy their right to education—one of the fundamental child rights.

“As children and the youth, we do not contribute to changes in climate change as much as adults do.

“But we are affected by climate change as much as or more than the adults,” claims Ester. 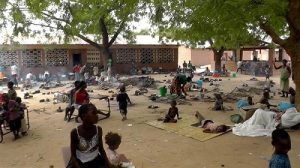 Classes are interrupted as schools are turned into evacuation centres

Jane and Ester are an embodiment of climate change injustice not only in Malawi but also in the Sub-Saharan region. They represent thousands of flood survivors, mainly children who suffer the most.

Meanwhile, Malawi, Mozambique, Madagascar and other countries in the Southern African Development Community (SADC) region, are still counting the cost of damage caused by heavy rains and flooding linked to Cyclones Ana, Batsirai and Gombe, among others.

In Madagascar, at least 48 deaths were reported while 130,000 people were left homeless.

In Mozambique, according to published reports, Cyclone Ana destroyed over 10,000 homes and dozens of schools and hospitals.

In Malawi, the floods displaced more than 110,800 people, At least 33 people were killed, 158 were injured, and another 20 are still missing.

Homes, irrigation systems, roads, bridges, and other infrastructure were all damaged by the storm. 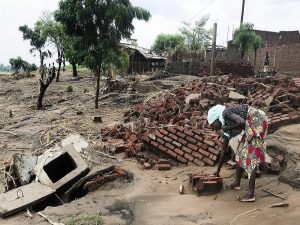 One of the survivors of the flood in Mozambique [Pic-Internet]

And just recently, severe flooding and landslides caused by heavy rainfall caused the death of 448 people, displaced over 40,000 people and destroyed over 12,000 houses in the southeast part of South Africa.

It also severely damaged infrastructures: roads, health centres, and schools and the President of South Africa declared a national state of disaster due to the severity of the floods.

Another familiar narrative of how poor nations are at the receiving end of climate change injustice, at the expense of the rich.

In his address at the COP 26 conference in Glasgow, Scotland in November 2021, Malawi’s President Dr Lazarus Chakwera, who is also the former Chairperson of SADC, expressed concern that heavily industrialized Western countries are not doing enough to sharply cut greenhouse gases.

The Paris Agreement, a legally binding International treaty on climate change—adopted by 196 Parties at COP 21 in Paris, seeks to limit global warming to well below 2 degrees Celsius, compared to pre-industrial levels.

Equally of relevance in this regard is the 2015 Sendai Framework for Disaster Risk Reduction. Among other things, the framework seeks to internationally effect a substantial reduction of disaster risk and losses by 2030.

These unpleasant events are occurring at a time when developing countries in the Sub-Saharan region adopted the United Nations Sustainable Development Goals (SDGs), which, among others, call on nations—poor or rich—to promote prosperity while protecting the environment and tackling climate change.

In 2015, all United Nations member states adopted the SDGs as a universal call to action to end poverty, protect the planet and ensure that all people enjoy peace and prosperity by 2030.

However, countries in the SADC region seem to be grappling with natural disasters, mainly floods, with more resources being channelled towards post-disaster activities.

In 2019, heavy rains and flooding linked to Cyclone Idai killed 60 people, displaced nearly 87,000 and affected the livelihoods of around 870,000 people in Malawi.

Over US$370 million (over K2.7 billion] was needed to cope with the loss and help vulnerable households.  Education also suffered as schools were shut down in the affected areas.

It was a similar story in Zimbabwe. Heavy rains and flooding linked to Cyclone Idai, killed around 40 people. Homes and properties, including a stockpile of coal at Hwange Power Station, the country’s largest thermal power facility, were equally damaged.

In neighbouring Mozambique, over 500,000 people were rendered homeless and an estimated 700,000 hectares of crops were lost in central Mozambique as a result of widespread flooding and heavy winds in the wake of Idai. Ninety percent of the City of Beira was damaged.

During 2021 and 2022 the SADC region experienced six cyclones, affecting more than three million people in those countries. Tropical Cyclone Idai cost the southern African nations more than $3 billion to repair the damage, according to the World Bank. In Mozambique, the country where the cyclone made landfall and caused the most destruction, over $800 million in assets  were destroyed.

Likewise, a 2021 study by Nature Geoscience shows that climate change is causing an expansion of tropical cyclones, leaving other countries more vulnerable. 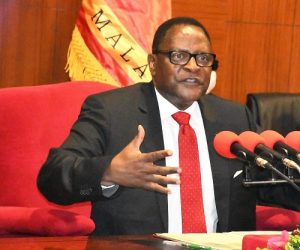 Chakwera: We have suffered a great deal

These changes have major implications for human welfare and threaten to undermine development gains across sectors. And mostly, the poorest and most vulnerable communities—both in rural and urban areas—suffer the most.

Center for Environmental Policy and Advocacy (CEPA) believes disasters such as floods and droughts are a genuine threat to the advancement of any development agenda and in this case, they pose a very big threat as far as the region’s efforts to attain the SDGs are concerned.

CEPA Executive Director, Hebert Mwalukomo, says Heads of Government and State in the SADC region need to work towards reducing the risks that are associated with disasters, reducing loss of life and loss of infrastructure.

“We need to minimize all this and we need solid laws and policies that can empower authorities to move communities from flood-prone areas to other places considered safe,” says Mwalukomo.

According to him, SADC developed a Protocol on Environmental Management for Sustainable Development, which was signed by all Member States—except for Mauritius and Comoros— in 2014, and has so far been ratified by three Member States, namely Eswatini, Namibia and South Africa.

The Protocol is aimed at promoting sustainable utilization and trans-boundary management of the environment, covering a wide range of issues, including climate change, waste and pollution, chemicals management, biodiversity and natural heritage, sustainable land management, marine and inland water resources as well cross cutting issues such as gender, science and technology and trade and investment.

“We urge all other Member States to quickly ratify the protocol so that it can be immediately enforced. Article 12 of the protocol is specifically addressing measures to deal with the impacts of Climate Change.

“It is the only legally binding document for managing the environment in the region, hence the need to ensure its immediate and adequate enforcement, to address the increasing challenges, we are facing daily,” says Mhlongo. 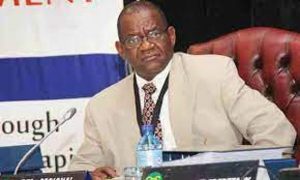 Malawi’s Minister of Natural Resources Climate Change, Eisenhower Mkaka, admits that sub-Saharan Africa is highly vulnerable and uniquely susceptible due to its low adaptive capacity and low resilience to the impacts of climate change.

In 2020, Ministers responsible for Disaster Risk Management (DRM) met in Zanzibar where they approved the Regional Resilience Framework 2020- 2030 with strategic performance pillars to address decision-making, poverty and vulnerabilities, gender inequalities, DRM mainstreaming and resilience building for strengthened disaster risk management in the region.

Strategies supporting DRM efforts in the region include the new SADC Vision 2050 and RISDP 2020-2030 Strategic Objectives for DRM, SADC Preparedness and Response Strategy and Fund 2016-2030, (SADC) Regional Resilience Framework 2020-2030, Africa Strategy for Disaster Risk Reduction and Programme of Action and the Sendai Framework.

Meanwhile, the Head of Communications and Public Relations at the SADC Secretariat, Barbara Lopi equally concedes that DRM efforts faced several challenges, including the outbreak of Covid-19, African Migratory Locusts Infestation in eight Member States and EBOLA in the Democratic Republic of Congo.

However, Lopi says member States are addressing disaster risk from a regional approach through national-driven actions.

According to her, countries aligned their disaster risk management frameworks, including policies and strategies, to the Sendai Framework on Disaster Risk Reduction (SFDRR).

Lopi further calls member states to enhance the building of resilience of the region’s population through measures that reduce vulnerabilities to several elements including poverty, food insecurity and malnutrition, among others and enforce climate mitigation measures to contribute to the reduction of greenhouse gases that cause climate change.

“This can be achieved by promoting re-afforestation programmes, controlling agriculture and cultural practices including cultivation on marginal lands that promote deforestation and promoting climate-smart practices including climate-smart agriculture and enforcement of building standards to ensure the resilience of infrastructure and property and promote ‘building back better after disasters,” she suggests.

But for now, for Jane and hundreds of children at Bangula Admarc camp in Nsanje alongside several others in rural Africa, the UN SDGs on education, poverty reduction and prosperity, among others, are but a probable luxury for the rich.