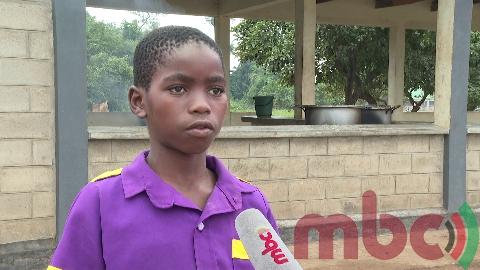 Authorities and some parents in Chikwawa have touted the School Feeding Programme (SFP) as a catalyst for higher primary school enrolment and a key factor in reducing the challenge of learners dropping out of school in the district.

A visit to Chilongoma Primary School unveiled that the provision of soy porridge to the learners improves not only learners’ nutrition but also their punctuality for classes. On a material day, we found the learners already at the institution as early as 6:30 am.

One of the pupils at the school, Carlos Welezi, told MBC Online that attending classes on an empty stomach is a great challenge to a learner. He recalls a time when he underwent that experience and said his performance in class was compromised. 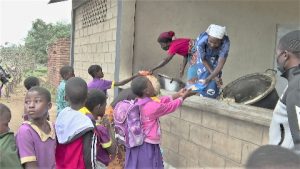 “Before the introduction of the School Feeding Programme, my performance in class was not up to mark. I couldn’t understand the lessons as I was hungry. But now my concentration has improved because even if I don’t eat at home am assured of eating here at school. Last term I was number 9 and this term am aiming to be in the top five,” said Welezi.

The World Food Programme (WFP) in the spirit of Sustainable Development Goal number 2 which advocates for the eradication of all forms of malnutrition by 2030, rolled out a two-pronged approach. It either provides a corn-soya blend flour which is fortified with vitamins and minerals to the institutions under the SFP or provides funds to a primary school so that it purchases food items which are grown within the locality of the school to feed the learners.

Head of WFP Sub Office in Blantyre, Elton Mgalamadzi, said Welezi’s school has been supported by WFP with soya flour since 1998 but currently, it has graduated to start purchasing food items from farmers in the surrounding locality.

“We give the learners diversified food which is nutritious. We believe that if we address nutritional issues among our learners, they will be healthy and attentive in class thus the challenge of dropping out from school will be taken care of resulting in more learners completing their primary education. So we are achieving multiple objectives with this kind of programming,” said Mgalamadzi. 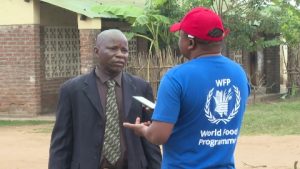 Thesi (L) responding to questions from a journalist

The headmaster of the institution, Kambani Thesi, attests to the impact of the programme in the area.

“This is 6:30 am and most of the learners are already here. Punctuality has greatly improved, secondly, the school retention rate has gone up which means more learners are staying in school. Thirdly, repetition has drastically gone down, learners are passing exams and moving to the next class. Let me also highlight that school dropouts have significantly been reduced. Before this programme over 30 girls annually, were getting into early marriages but currently, we have rare cases of that, I can confidently say school retention is at 96 percent at this institution which has 678 learners, ” said Kambani.

WFP’s intervention in Chikwawa augurs well with the recent  United Nations Children’s Fund (UNICEF) report which emphasises that “schools must focus on the wellbeing of the whole child and attend to the needs of children holistically and comprehensively.”

The product is prepared from heat-treated maize and whole soya beans, fortified with vitamins and minerals.

Welezi’s class teacher Anne Yotamu added that the school feeding programme has leveraged the gender dimension in that both girls and boys are outclassing each other. 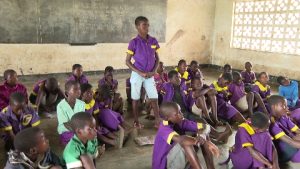 “Much as the boys like Welezi have improved in their performance in class on the other hand girls are equally doing fine. They are assured of a nutritious breakfast here at school thus they come earlier and don’t miss classes thereby setting them at par with the boys. Locally, girls in this area prepare breakfast at home and they usually eat last. This programme has changed that narrative in that the girls are being exempted from food preparation in the morning,” said Yotamu.

Chairperson of the Mother Group in Chikwawa, Mary Masitala aged 54 said the school feeding programme has been of great benefit to the physical and mental growth of the children. 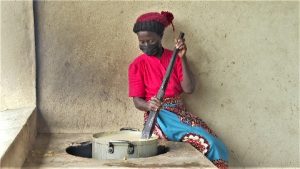 “As a mother, I know the importance of good nutrition. No child can grow healthily and have well-developed mental faculties if good nutrition is lacking. Children who are taking the fortified porridge on daily basis are looking healthy and happy. Chikwawa is a disaster-prone area and recently we were hit by cyclones Ana and Gombe. This programme is a timely intervention to support households here in providing nutritious food to their children,” said Masitala.

“Initially this programme was supposed to be implemented by the government. On behalf of the council, I would like to thank WFP for coming up with this project. Nutrition is key to every child’s growth. Here at school through this programme, the learners get four groups of food. In the homegrown approach, we give the learners futali (boiled potatoes which are mixed with groundnut flour and vegetables) so we expect that once they go home they can add the remaining two groups such as dairy foods and fruits. In this way the child will grow healthy and his/her performance in class is expected to improve,” said Muyanika. 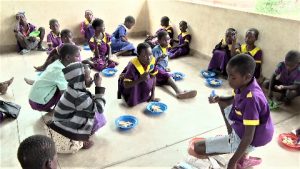 WFP says studies in Malawi estimate that for every $1 (K1,031) spent on school feeding, at least $6 (K6,190) are returned in better health and productivity when these reach adulthood

According to UNESCO, 3.7 million pupils in Malawi are enrolled in primary education. About 35 percent of these children (1,295,000) either receive or are potential candidates for receiving porridge in Malawi.

“Nutrition is a prerequisite for human growth and development and an integral element for the social and economic development of a country. Adequate nutrition is critical for the physical and intellectual development of an individual and is a major determinant of one’s intellectual performance, academic and professional achievement, and overall work productivity at later stages in life. This, directly and indirectly, influences potential future gains and economic contribution of the individual to the nation,” reads the policy in part. 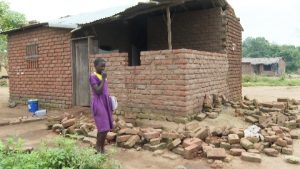 The School Feeding Programme as championed by WFP in Chikwawa and other districts embeds the sustainable development goals and government of Malawi’s policies through education, nutrition and building livelihood support with overarching goals to see learners like Welezi protected from dropping out of school.