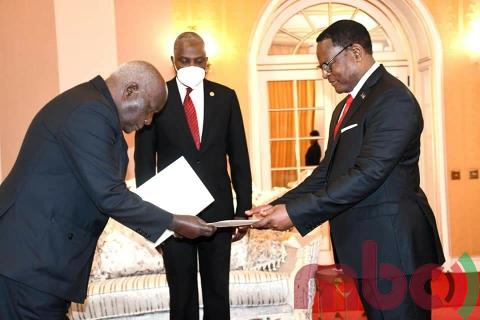 The New Zambian High Commissioner to Malawi, Panji Kaunda, says there is a need to strengthen the cordial relationship between Zambia and Malawi which will further grow the economies of the two countries.

Kaunda said this in Lilongwe when he presented his letter of credence to President Dr Lazarus Chakwera at Kamuzu Palace.

He said as a High Commissioner his role is to ensure that the one-stop border post in Mchinji opens as soon as possible as well as hasten rehabilitation of the Mchinji, Chipata and Nacala Railway Line.

He further said this will facilitate trade and easy movements for the people of the two countries which is crucial for the economic development of the countries.

“Zambia and Malawi are almost one. We share the same traditions, we share the same language we share the same food. So my role here as sent by my president is to cement further this relationship that we have enjoyed for so many years. We are in the era of economics, the political display is almost behind us. Our role now is that the economies of the two countries grow for the benefit of the citizens of the two nations.

“We have the Nacala Corridor, we have the borders we share with you so there are so many things that will harmonise the relationship between the two countries. Not only for politicians but the people on the ground,” said Kaunda.

Before presenting his letter of credence, Kaunda inspected a guard of honour mounted by the Malawi Defence Force.

A letter of credence is a formal diplomatic letter that an envoy of a particular country presents personally to the receiving Head of State and it designates the envoy as Ambassador or High Commissioner.