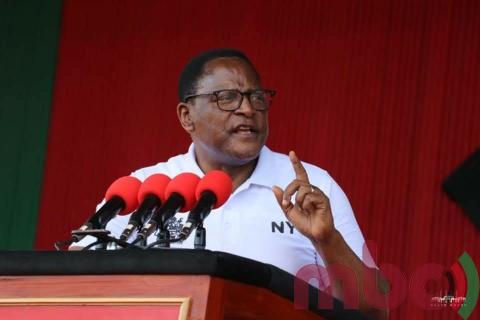 President Dr Lazarus Chakwera says the National Youth Service (NYS) will make a difference to the nation when the youths acquire specialised training in various fields.

Dr Chakwera was speaking at Chikonde Primary School Ground, in Neno during the launch of the NYS.

Speaking during the launch, President Dr Lazarus Chakwera said the launch of the NYS is a fulfilment of one of the key promises he made during the campaign trail in 2019.

The Malawi leader also noted that the country has more youths who are not employed despite having some formal training.

He then clarified that the NYS  comes into effect to empower the youths so that when their mindset is changed and skills are imparted they become a national treasure ready to serve the nation and create employment for others.

Dr Chakwera reiterated that his government wants to build a nation of youths who are productive and contributes to the country’s productivity.

He said the government will ensure that it lays a conducive environment for the thriving of small and medium enterprises and added that the National Economic Empowerment Fund NEEF prioritises youth groups or cooperatives hence provision of over K3 billion in the national budget.

The President has assured the people of Neno that government will ensure that food is available in light of Tropical Storm Ana and Gombe that hit the country earlier this year.

He also promised that the much-awaited Neno Road currently under construction will be completed and said the works will be done in phases.

He said the youth during the programme will receive start-ups to get established in business. He further said the uniqueness of NYS  is that every Malawian youth regardless of their political affiliation will be considered.

The event was spiced up by traditional dances, comedy, poetry and performances by Ligowe Youth Band and urban music artist, Eli Njuchi.