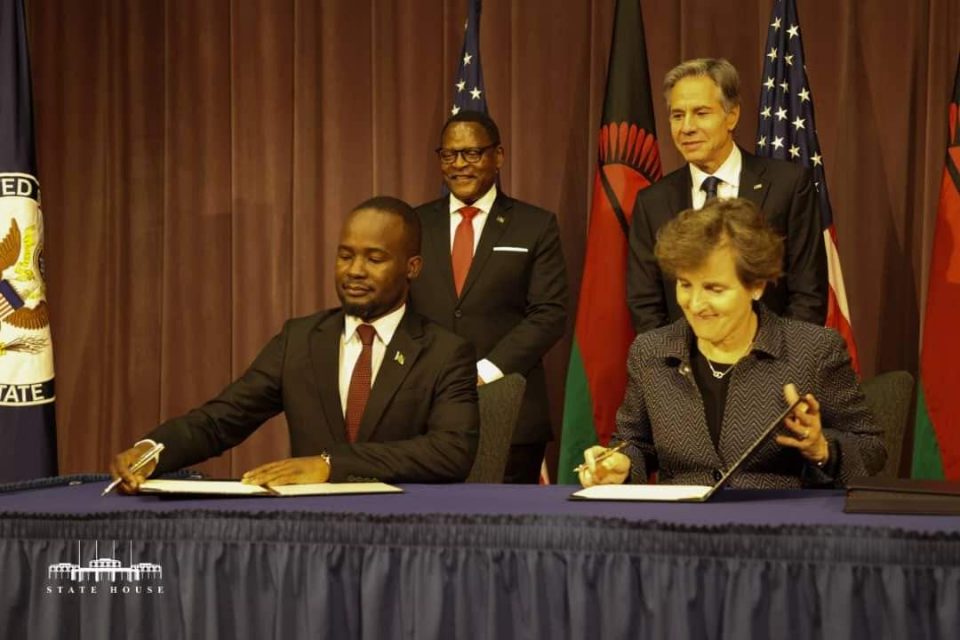 Government has signed the $350 million Millennium Challenge Corporation Compact number two with the US Government for the Malawi transport and land projects.

The compact will invest in four rural corridor roads, several link roads, and the first-mile infrastructure within the corridors benefitting 7 districts.

The long-awaited Malawi Transport and Land Compact further seek to improve rural access to markets through road corridor development, and road maintenance reforms and to improve land administration and the productive use of land to benefit over 5 million Malawians while driving inclusive growth.

The compact has three main projects which include the Accelerated Growth Corridors, Increased Land Productivity and the American Catalyst Facility for Development.

Speaking at the ceremony, President Dr Lazarus Chakwera said the compact is evidenced by the progress made in the fight against corruption and the policy and institutional reforms his administration is undertaking.

For his part, the US Secretary of State, Anthony Blinken, said the compact is the yield of his country’s shared democratic values with Malawi and pledged more support to the government and people of Malawi.

Blinken further said that he is delighted to see that through the Malawi-Millennium Development Trust, the country is taking the lead in the project by designing solutions that suit the local context.

Now that the compact has been signed, some formality remains to be completed for the compact to enter into force.

Government has to table the Roads Bill, Fertilizer Bill and start implementing the Seed Act which was already tabled and passed by Parliament as part of the agreement with the US Government for the compact.

The MCC Compact number two succeeds the first one which was signed in 2011 and entered into force in 2013 and ended in 2018 which added electricity infrastructure for transmission and distribution.

The project will further focus on policy and institutional reforms and capacity building at the national and district levels. The land project investments include improving land administration services through revenue mobilization, devolution, improving information and records, creation of a land authority, and improving the delivery of public services in Malawi’s four city councils.

The government has committed to keeping to its minimum the period within which the compact comes into effect as experience shows that previously, compacts like that have taken 12 to 18 months to materialise.