Malawi Congress Party Director of Youth who is also Minister of Sports Richard Chimwendo Banda has urged the youth who form a large percentage of the population to take a leading role in the tree planting exercise this season.

Chimwendo Banda was speaking in Lilongwe after joining the MCP Youth League in the tree planting exercise at Kalambo and Magwero Primary School in Lilongwe City Centre Constituency.

Chimwendo Banda was in the company of the MCP Regional Chairperson for the Centre, Patrick Zebron Chilondola.

Delivering his message during the exercise, Chimwendo Banda said the youth have a critical role in restoring the environment.  He then urged all political parties in Malawi to be at the forefront in dealing with the effects of climate change. He also emphasized the need to teach students about planting trees. Chilondola said the party desires that MCP Youths should be more useful than youths in other parties where they are used as a tool of violence. 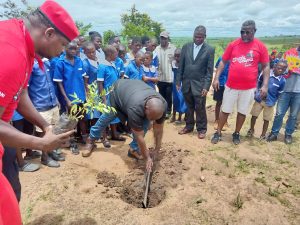 Chilondola urged the youth in the party to continue following the four cornerstones of the party. He said the party desires to make sure the youth are used in promoting peace.

Primary Education Advisor for Shire Zone, Clifford Banda, hailed the MCP Youth and its leadership for taking a leading role in restoring the environment.