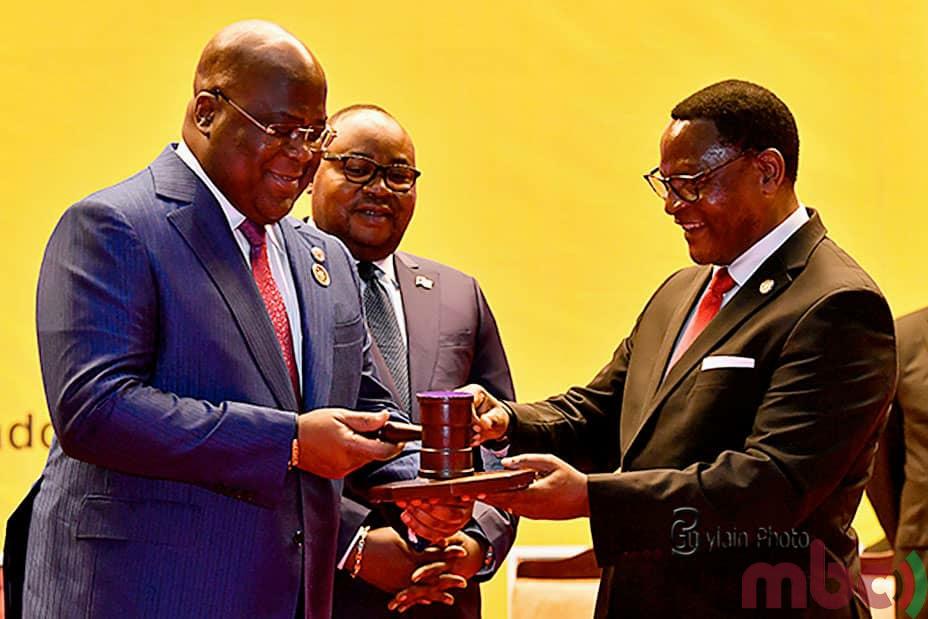 President Dr Lazarus Chakwera has handed over SADC Chairmanship to Democratic Republic of Congo (DRC) President Felix Tshisekedi, with a call for member states to remain a strong force in advancing the bloc’s development aspirations.

He was speaking at the 42nd Ordinary Summit of SADC Heads of State and Government in DRC’s capital, Kinshasa.

During the opening of the Summit, the outgoing SADC Chairperson thanked member countries for their immense support during his year-long tenure of office. He then wished SADC’s new leader well, adding there’s a need for collaborative efforts for continued regional success.

In his keynote address, the Malawi leader also took stock of key projects the region has achieved under his leadership. He said among them are increased access to the Covid-19 vaccine, energy interconnector projects and the deepening of regional integration efforts.

At this point, Dr Chakwera emphasized the bloc must remain steadfast in building resilience to counter emerging calamities. He pointed out that SADC should operationalise the Humanitarian and Emergency Operations Centre (SHOC), to help deal with external shocks.

The outgoing SADC Chairman then spoke strongly of the need to protect and defend the bloc’s minerals and natural resources, for the growth of national economies.

“We must defend what is ours and make sure that no one takes from us what is ours. With the resources we have, we refuse to be anyone’s bigger and with the unity we have, we must refuse to let anyone steal from us or use us to steal from our people. So let’s show the world with one voice that Africa is not for sale, ” said Chakwera.

Apart from honouring outstanding secondary school students through an essay competition, SADC has also recognised media personnel across the region, for stories on enforcing regional integration. Among those honoured in the television category, is MBC Journalist, Henry Haukeya.

The Summit is being held under the theme of promoting industrialisation through agro-processing, mineral beneficiation and regional value chains for inclusive and resilient economic growth.

UPST FOR QUICK REOPENING OF SCHOOLS