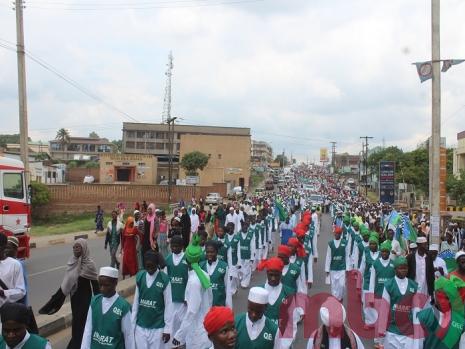 In the wake of faith triggered violence between Muslims and Christians in Balaka last week, Muslims in Malawi on Sunday used Ziyara Parade- Birthday celebration for Prophet Muhama- to preach peace and love.

Yao Paramount Chief Kawinga, who was the guest of honour at this year’s Ziyara parade in Blantyre says it was cheer luck of understanding of both the Holy Qoran and Holy Bible for Christians and Muslims in the country not to co-exist.

Kawinga said Islam and Christianity are but one religion and should not bring division  amongst them in any area of development.

Kawinga, however, acknowledged that  there could be school ownership wrangles among churches  in the eastern region which he said is a sad development and hence he appealed for Muslim non governmental  organisations (NGOs) to build more schools for the Muslim community.

Also speaking at this year’s  Ziyara celebrations held under the theme ‘Islam the Religion of Peace for Mankind’ was Muhammad Abdul Jabbar, Coordinator for the AT-Tariqatul Qadiriyyah Sunni Muslim Association (AQSA), organisers of Ziyara parade in Blantyre who expressed happiness with non Muslims who also joined the celebrations held on Sunday  at Mpingwe sports club.

Muslim commemorates the birth of Prophet Muhammad on the third day of 12th month of Hijr calender.